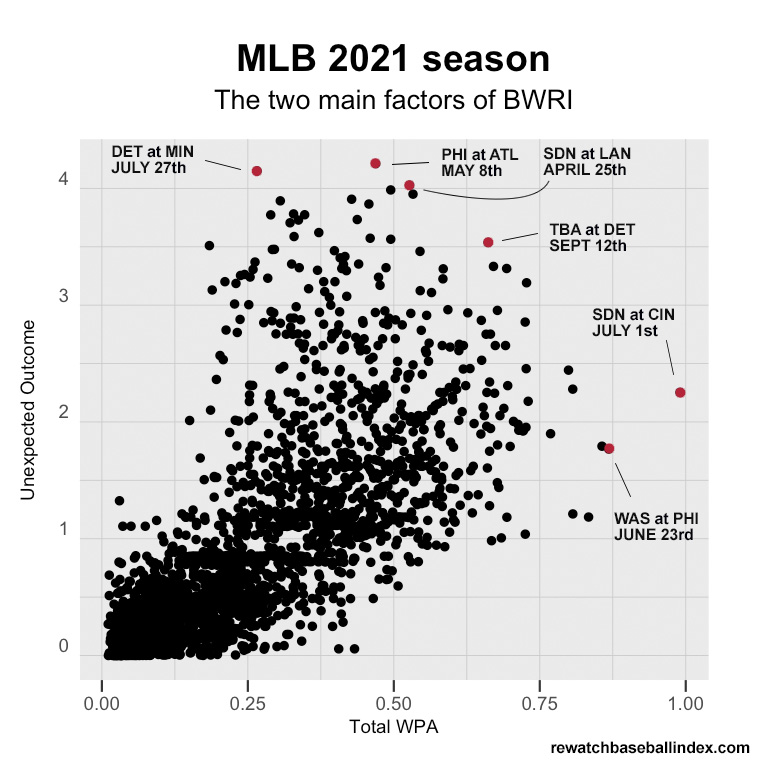 As soon as Retrosheet released the play-by-play datasets for the MLB 2021 season, I got to work on BWRI scores for the season. Let’s take a look at some of the most exciting games according to that rewatch index. I’ve made a graph combining the two main factors, but have in mind that BWRI also takes account of how close is a game, number of K’s, rivalry and no-hitters.

Reds at Indians, May 7

BWRI pays huge attention to no-hitters, either if they got completed or not. Wade Miley’s no-hitter also got a very good score for a close game and decent for the other factors, since the winner didn’t get decided until the 9th inning. That’s why it got the highest score for the season even it’s not highlighted on the graph of the two main factors.

That was a heck of a game. After a 5-run 6th inning LA wins 7-1, but with two runs in each of the rest of the innings San Diego takes it to extras. That was the third most unexpected end of the game for the season according to BWRI. The game ranks so high also because of the traffic on the bases during the extra innings. LA got bases loaded with one out in the 10th and first and second with still no outs in the 11th but couldn’t win it. That made a good amount of added WPA. Also, Dustin May’s performance with 10 K’s and a bit of extra help for the rivalry helped to push the score high.

A Grand Slam that ties the game with one out in the 9th makes that game almost the highest unexpected outcome for the season. On the contrary, it has a low added WPA value, basically nothing happens until the last inning. That makes the game a 0.953 on the total BWRI score. That makes sense to me.

Phillies at Braves, May 8th

The most unexpected end of the game goes to that Braves walk-off. The Phillies score 3 runs in the top of the 12th, but Atlanta rallies with 4 in the bottom. Also, there’s one run for each team in the 11th. The game ranks #6 in the overall BWRI rank for the season.

Here we have a give and take in the 8th, Rays score four, Tigers score three and the game gets tied. Two runs for each in the 10th kept it on the line. High scores for the two main factors and also overall.

This is the game with the highest added WPA value for the season. With gives and takes for the 8th and 9th innings and many runners on board, the Reds finally win it. It’s just a game of nine runs after all. Maybe you would expect many more runs for the game with the highest added WPA, but have in mind that I give extra value to that WPA changes in the late innings. Also have in mind that the traffic on the bases also agitate the WPA values.

Here we indeed have a huge amount of runs: 25. Great gives and takes in the middle innings, and also remarkable changes in the late ones.

And what about the postseason? BWRI highlights especially two games of NLCS: second and third. Game 2 gets ranks #41 overall for the season. The Dodgers take the lead with two in the seventh, but Atlanta ties in the 8th, and wins it in the 9th. Game 3 it’s also remarkable because Dodgers win it for just a run after scoring four in the 8th. Nevertheless, the second most exciting game of the postseason according to BWRI is NLDS Game 5. The fact that it remained very close until the ninth and the rivalry factor pushed it up to a .973 overall score.

I’ve made some adjustments to the algorithm. As a Mets fan, one of the most incredible games I remember recently was the atrocious loss New York suffered on September 2019 against Washington. After scoring five runs in the top of the ninth Mets were winning 10-4, but Nationals managed to come back with a 7-run bottom of the 9th. That was the kind of game I wanted to be on the very top of the list, but even though it was a .978 score, it was barely the fifth game on the list for Washington on the season. Why was that? The game had a very high Unexpected Outcome value, but a 4-run ninth inning come back by the Dodgers against the Mets (again :__) was on top of it.

The adjustment I made was to take into account not only the change in win probability during the late innings, but also of the number of runs scored on those late innings. That made the Nationals come back more attractive. Now it scores .990.

The problem after that was that a sweet top of the 10th or top of the 11th made a game score too high. Imagine a win 7-2 final score, game tied in the 9th, 5 runs in the top of the 10th. That was not a game I wanted on the top of the list. So I introduced an element of proportion for that many runs scored on extra innings. The more difference, the less value for those runs.

Also, walk-off factor was cut in half because it made the top of the list too much predictable.