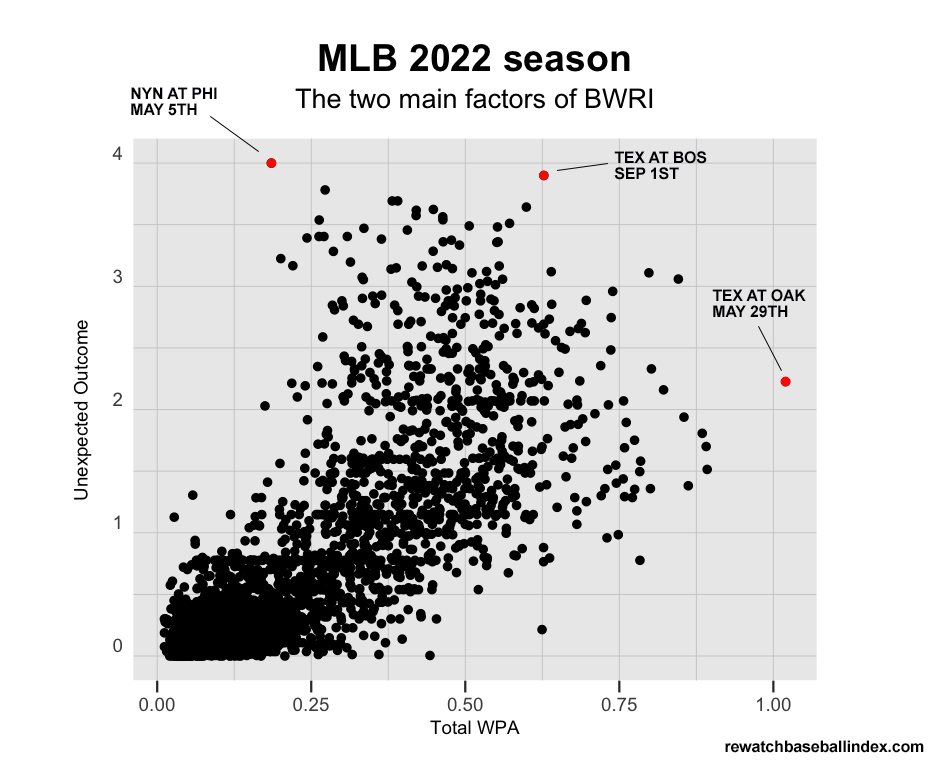 The 2022 update of Baseball Worth Rewatch Index is already available. Using Retrosheet’s play-by-play data the algorithm graded the most exciting games of the season according to parameters as unexpected outcome, total amount of winning probability added, pitching performance or rivalry. Let’s take a look at the top of the list.

The Red Sox won an incredible game after coming back from trailing 8-3 in the bottom of the 8th and reaching home plate four times in the 9th. The algorithm likes the huge number of runs scored by both teams in the late innings and of course the unexpected outcome.

Here BWRI loves the fact that the Blue Jays took advantage, scoring 3 in the 8th, but the White Sox managed to force extrainnings with 2 in the 9th. The game went to the 12th inning, with each team scoring one run in the 10th and 11th. Also a .999 score.

Also an incredible game. Pittsburgh takes the lead three times, and scores 4 runs in the 8th which seems conclusive after different ups and downs during the game, but New York scores 5 in the 9th and takes the game. Clearly a game that was meant to get BWRI’s attention.

Texas at Oakland, May, 29th

Another .999. Clearly the game with the highest added WPA of the season. Only 11 runs summing both teams, but plenty of bases loaded in the late innings. Texas loaded the bases during the 7th and got nothing. Oakland got first and third with no outs in the 7th as well, and also nothing. That makes all the difference in a game that just looking at the box score doesn’t seem that interesting.

And what about the postseason? BWRI loves the most how Cleveland stunned the Yankees in game 3 of the Divisional Series, coming back with 3 runs in the 9th. A game that by the way grades #7 among the most exciting of the postseason going back to 2011.

BWRI also grades high the way that Seattle knocked out Toronto in the Wild Card Series, tying the game with 4 runs in the eight and winning with another one in the 9th for a 10-9 final score.

As a Mets fan, I pay special attention into how BWRI grades their wins. For sure, the most stunning win for the Mets this year was the comeback in Philly, scoring 7 runs in the 9th, but the algorithm doesn’t see that game as the most exciting win of the season for the Mets. It actually grades it #5 with a score of .959. The reason is the Phillies scored 4 runs in the first, and after that nothing much happens until the 9th. So it’s basically a boring game with an ending out of the charts. The graph makes it very clear.

Actually, the game grades first overall for the season on unexpected outcome, but scores badly on added win probability. It’s arguably if that leaves BWRI in a bad situation. The way I see it, BWRI tries to suggest games that are fun, and from that point of view it is right to not make that game the most exciting of the season for the Mets. BWRI loves the most another win in Philly: August 28th, a game with much more alternatives with the Mets coming back scoring 3 runs in the 9th and Phillies filling first and second with no outs in the 9th.

Check out for more at www.rewatchbaseballindex.com.